How to distinguish data between development version and live version in PlayFab?

I am wondering if there is a way to classify data by version in PlayFab.

My game is currently released on Steam, and patches are released at least twice a month.

Title Data contains data used in games, and I want to divide Title Data into a

development version and a live version.

However, I couldn't find a way to classify the data by version in PlayFab.

So, when I use Title Data, I added the string DEV_ in front of the key to the

User's Player Data is also used in this way, but I don't think this method is safe.

In the case of leaderboard data, the problem is more serious. It is not

possible to classify the data by version at all.

Therefore, the developer's leaderboard data is also applied to the live version.

To differentiate between the development version and the live version, we tried to create another app.

I am doing real-time multiplayer with Photon Quantum on the game I am developing,

Only one Custom Server Provider can be configured in the Photon Dashboard.

Is there a way to use the data of the live version and the development version separately in PlayFab?

It’s suggested to create a separate title to host the development version, I can see that you mentioned something like trying to create another app for this, did you mean creating a new title? And if so, may I know more details about why you couldn’t do that?

It is possible to create a title for the development version.

I am migrating with PlayFab by setting Custom Server Provider in Photon dashboard.

However, Custom Server Provider can enter only one Authentication URL.

So, even if you make a development version title, I think it will not be usable.

Please let me know if I am wrong or if there is another way. 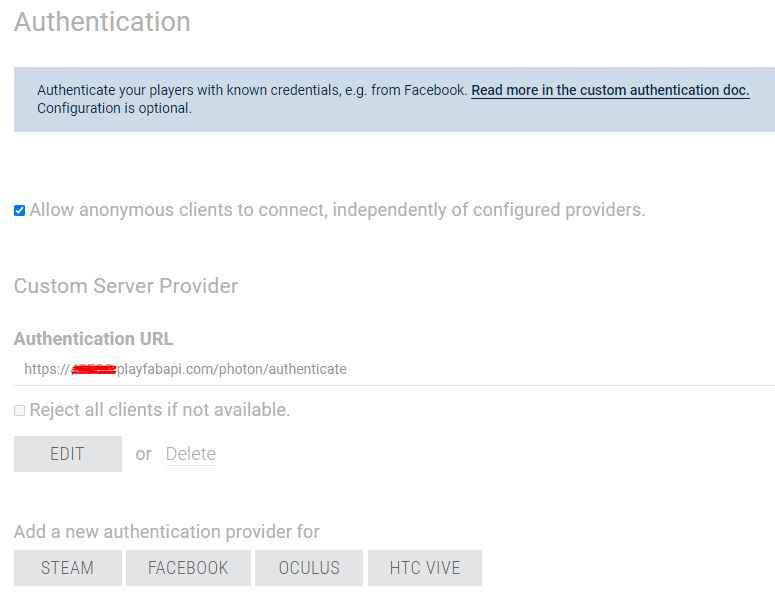 Maybe create a new Photon Quantum APP for that title?

It is possible with one more Quantum App.

However, regardless of whether Photon Quantum is being developed or released,

after the one-month trial period, I have to pay a lot of money every month.

I don't have much money to pay twice the cost.

So I can't make the Photon Quantum App in two.

3 People are following this question.

How can i export files data for all users?

Get player data from leaderboard players